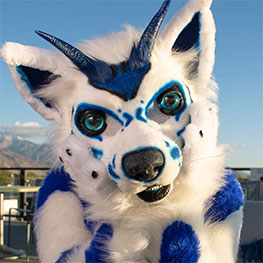 I grew up in Sydney, Australia – and while I always had an affinity for anthropomorphic art and characterization, I never really considered myself a “furry”. In early 2013 I got a job offer to work in the video game industry in Salt Lake City, and took it, thus beginning a brand-new chapter in my life. New beginnings brought new opportunities and rejuvenated my confidence in being true to myself, my ambitions, my lifestyle, and my curiosities. I was now ready to embrace the part of me that said to the world “Yep, I’m a furry, and it’s awesome!”

After taking time to settle into this new country, I decided to explore various social groups in my local area that shared these same interests as me and stumbled across a couple of furries at a local Gaming Convention. They told me if I wanted to meet other furs, I should look into this group called U2F2. After doing some research I found out about a weekly game night they held at the Watchtower Cafe and decided to attend. The rest is (as they say): history.

What I found was one of the most welcoming, supportive and friendly furry communities. I instantly started making friends and began attending all sorts meets. Less than a year after becoming an actively involved member of the Utah Furry community, I was nominated for adminship. After gaining this role, I vowed to pay forward all of the love, care, and support I received when I joined this community. Some of my noteworthy contributions so far have been hosting the weekly Furfit fitness events and creating the U2F2/UtahFurs website.

My goal is to keep this community going strong, and through many gestures (both big and small) I hope to positively change the lives of others who are looking to find their place in this big fluffy world!

If you would like to get in touch with me, you can find me on Twitter, or on Telegram.